New track for the album "Madeira" - "Nossa Senhora do Monte"! 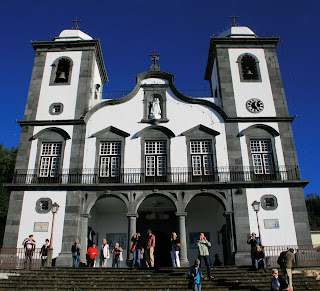 After some trouble during the past days, I am proud and happy to present to you the second track for the themed album "Madeira". The style will maybe be a bit unusual for the long term Cimelium fans.. and also for all the others. One thing upfront: If you cannot stand church organs at all, you better skip this ;). And yes: The album "Madeira" will be a lot more "conservative" and melody-oriented than "Mesopotamia". There are reasons for this ;)

Oh, many of you do not know anything at all about a new Cimelium album? Well, I must have forgotten to tell you about this somehow. Ok, so let's correct this now. Yes, of cause there will be a new album by Cimelium... or did you think, I will now just stop? ;) Ok, and that album will be about my beloved island in the sun, Madeira. Traditionally, there will be again 13 tracks on the album, each about a special location on the island, trying to capture the atmosphere. STOP! I allready hear my attentive fans saying "13 tracks? That's not enough to capture all the beautyfull places in Madeira!". Right, and because of that you can hear the faint sound of an album "Madeira Volume 2" at a far away horizon. But that's really a thing of the far away future.

Let's stay at the current album project "Madeira": One track I created allready last year, titled "Rabacal". Missed it? No problem, JUST CLICK HERE. As said: 13 tracks, each describing a special location in Madeira, more melody focussed than "Mesopotamia". Release date? Well, you ask questions... I don't want to promise too much. You know about my little problem with fixed dates... do you? But I can safely say, that something really bad must happen, if the album is not released this year.

Ok, much words, just as you know me... This current track "Nossa Senhora do Monte" is a bout the world famous church in Monte/Funchal and the surroundings. It was a place with a great feeling of majesty, peace and calmness for me. You just can feel great there, like allmost everywhere in Madeira. During a depression attack, which was taking me out of the game for the whole last week, I was nearly unable to do any creative work. Still I worked at this particular track from time to time. So you maybe hear to depression out of this track, but also hope and immortal bravery. I advise each and everyone going to Madeira to visit this marvellous place, and maybe you take a MP3 player with you and listen to this song while you are there. I am sure, you will 100% understand the song then. And now, enough said, here's "Nossa Senhora do Monte":
Posted by alionsonny at 7:56 AM