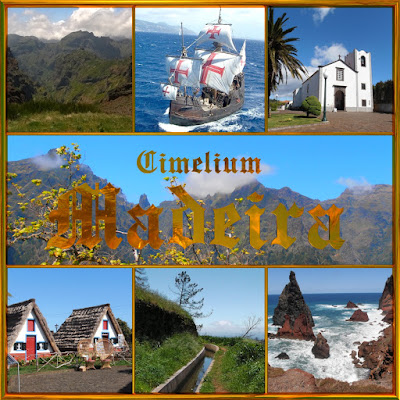 Thanks to my great distributor, we have a new time record regarding to the release of albums. Already two days ago, the "Madeira" album was available in the largest shops, ie iTunes and GooglePlay. It never went so fast.

So, and there it is. It really took long enough. The work on the oldest piece for the album began already in 2011! But who now thinks "Man, he always needs such a long time for everything!", is completely wrong. Six albums have been released since 2011, including the two first albums of Cimelium. I didn't work fulltime on this album since 2011. It still was a lot of work, all in all. And in my opinion it was worth it. It is a beautiful album.

And here we are at a possible problem: The album is beautiful, it is nice and cheerful. If you now think "Yay! Cimelium released a new album! I must have it!" and buy it at your trusted music dealer, you may be in for a unpleasant surprise. Mesopotamia and especially "Ad Hominem" were rather dark and very serious. "Madeira" comes in some places quite close to Willma Poppen, just from the cheerfulness level. If you like your Cimelium music dark and gloomy, maybe first listen to the album on Spotify or another streaming service. I do not like dissatisfied customers. So, is this cheerful sound the new Cimelium signature sound? No, definitely not. The next Cimelium album, the "continuation" of "Ad Hominem" will be gloomy, dark & serious again. Promised.

And since there are always people who just can't get enough, one or the other will ask: "And when will the next Cimelium album come?" Answer: This will take a LOOONG time, because two Cimelium albums have already been released in the first half of 2017 and now it's the turn of the two other music projects, not just out of fairness. So I ask for patience, if it is very quiet on this blog soon for long time. I'll be back as soon as the work on the fourth Cimelium album starts.

Here, however, the usual links, for people who find Google too complicated ;)

If you prefer another shop, simply search for "Cimelium Madeira" at your trusted music dealer. There are some pre-release-versions of songs of the album available online, e.g. On Soundcloud. However, these versions are in no way to be compared with the final product. They are unfinished. In order to avoid such confusion, I have stopped publishing any preliminary versions since a time.

Ok, that's it! I'll get back to you as soon as there's something new to report. This will most likely be on the occasion of the long-planned, completion of the Cimelium website, which is likely to also lead to a relocation of this blog
Be well!
Posted by alionsonny at 5:18 AM