Welcome to realms of CIMELIUM! Sit down by the fire, adventurer and listen to the sounds of magic and mystery. CIMELIUM takes you on an unforgettable inner journey in time and space. Yeah, so it says on the brandnew CIMELIUM Website, which will be available soon (about 24 hours) after this Blog is started. And this is no empty promise, my friends. Those of you, who allready listened to some of the works or this project will allready know this. So, if there are any people reading this who do not know what is Cimelium all about, I'll describe it briefly. I am Jürgen Wolther from Hamburg / Germany. I'm better known by my artist name alionsonny, under which I became quite known in the field of Reggae, Dub and, as I call it, reggaelike sounds. Back in 2009, when I experienced some health problems, I recognized that the source of those problems was mainly in the soul and not the body. So I started to experiment with various forms of Meditation and soon found "my own style". And as I love music, that own style of meditation needed a suitable kind of music. So I researched about so called Meditation Music and soon was more depressed than ever before, because what i found was either boring, ugly or in another way not my cup of tea. So i thought about creating my own Meditation Music and this was the birth of the project "Alion Meditations", and album project I planned to release under the artist name alionsonny. So I produced various tracks titled "Meditation One" to "Meditation Nine". Over the time it became more an more clear, that I could not maintain the original project idea, because the sounds moved too far away from the original approach. So in late 2011 the following happened: After releasing a wide variety of musical styles under the artist name alionsonny since 2004, i finally recognized, that doing so confuses not just some folks in my audience. And not just that: It even made some folks very angry, because they focussed on a particular genre/style of music I was producing and got mad when i released something completely different. And even more, some people didn't even know that i was doing anything different than reggaelike music, because alionsonny was so much known for that kind of music. So something had to change. this together with the insight, that the original "Alion Meditation" idea was no longer to maintain, I decided to start a new musical project under a completely new and as much recognizable artistname as alionsonny is. And that project should have as little to do with Reggae and Dub as possible, but feature the kind of music which I was seeing the "Alion Meditations" music was more and more developing into. I call it Chillout, ambient and Electronic Ethno music. Well, I think this is a description which is vague enough to allow a maximum of creative freedom, but at the same time gives the audience not just an idea what music they have to expect when it is released under the name "CIMELIUM". So far for the short history of that project.
So, what's next? As most of you will know, CIMELIUM released the first genuine CIMELIUM track, titled "Rabacal" some days ago. Genuine means, that it was the first track which was not released before as a "Alion Meditations" track. But still those old "Alion Meditations" tracks are about to be released as the first CIMELIUM music album. My girlfriend and me were brainstorming one night about a thematic idea which would suit the music and fit into the CIMELIUM concept. And from the start it was quite clear that the album will be themed by the ancient mesopotamian culture which fascinates both of us very much. So to end a long story: There are about 3 tracks still to finnish for that album, which will be titled "Mesopotamia". So I will rename and re-release all "Alion Meditations" tracks, once the brandnew CIMELIUM website goes online, then finnish the remaining 3 tracks and then release the album. We even finnished the coverart for that album allready and here it is: 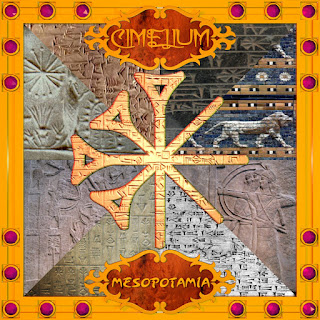