ALEA IACTA EST - The die has been cast! New song! 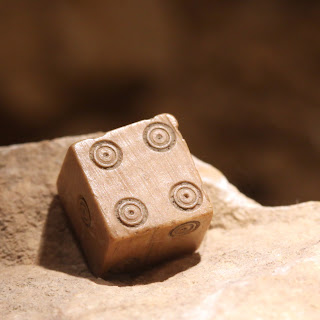 Yes, the Facebook friends already know it, and so do the followers on Twitter: The song "Alea Iacta Est" was published allready two days ago on Soundcloud as a pre-release version. So, why didn't I immediately write a blog post about it? Well, I allready announced the song briefly the day before yesterday morning, so I did not consider it to be very important to write the official release announcement, especially since there always are a few stragglers who miss the song at the first announcement on Facebook and Twitter . And they will be for sure happy about a reminder ;).

In addition, I was just still busy, working at the new song, released yesterday for Willma Poppen, and did not want break the creative flow for some rather boring blogging ;). Generally you should not be surprised too much about the fact, that I currently do not follow the usual promo procedure. This is part of a small experiment by which I try to improve my promotion strategy. For this purpose it is necessary to analyze the promo channels which promise the greatest success. You can read more about that later on, on the badly maintained alionmind records blog.

Those were quite many words allready, even though I wanted to make it very briefly here today ;) And there was still no word about the new song... The new song is actually already somewhat old. Work on this began in 2009 as a crude sketch for the predecessor project of Cimelium, the alionsonny project "Alion Meditations". Last year, just before my departure to Madeira, I began to shape that sketch into pretty much the present status. Since November last year, the song has actually already been on my hardddisk and I always thought I would have to add something special to it.

So it was there allready for months. This is not unusual: Many songs in "almost complete" status are on the hard drive and about some sure many of you would say that they are ready for release. And so did a friend every time we listened through the "Almost done" directory. The day before yesterday then, I asked myself very seriously, what EXACTLY I would have to do at that song and the result was: "Well, maybe I should smooth out the mix a bit, but otherwise it's really perfect." Well, that it was actually: I smoothed a few edges and it was finished.

The song shows clearly from which time its beginnings originate. It could easily fit seamlessly on the "Mesopotamia" album. And since the new (described in my previous post) album idea "Ad Hominem" is also a small peace offering to the part of my audience, which is shocked  by the first songs of the 'Madeira' album, the new song fits perfectly on "Ad Hominem". What? You don't know about the resentment that the first songs for the 'Madeira' album caused? Well, somehow I felt a bit like in the early days of the project alionsonny, back in the days in which I annoyed my small growing fan base, by constantly trying new styles of music. Not just a small part of the early Cimelium fans is not quite pleased with the direction the Cimelium sound took with the start at the "Madeira" album. Some say it is too happy, others say it is too rythmic and others just say it is too structured. One disgruntled fan even said "Cimelium goes Willma Poppen" right after the release of "Cais do Sardinha". This is not intended at all. I had already announced shortly after the release of "Mesopotamia", that the next album would sound different. And I had already preplanned the basics. However, since the album is a theme album about "Madeira", droning arabic-inspired mystic sounds would simply be inappropriate for the topic.

The album Idea "Ad Hominem" now gives me the opportunity to provide the "old fans" again with the usual dark sounds, while I continue the work at the happy relaxing concept album 'Madeira'. So everyone gets what he wants ;)

The song "Alea Eacta Est" is again a so-called "free floater" in best "Mesopotamia" Tradition and thus joins also wonderful in the line of the other two already completed songs for the "Ad Hominem" album, as you can easily hear in playlist linked at the very bottom of this posting. And now here is, after many words, finally the song:

And here is the playlist of the album "Ad Hominem" so far with all three songs:

Posted by alionsonny at 7:16 AM